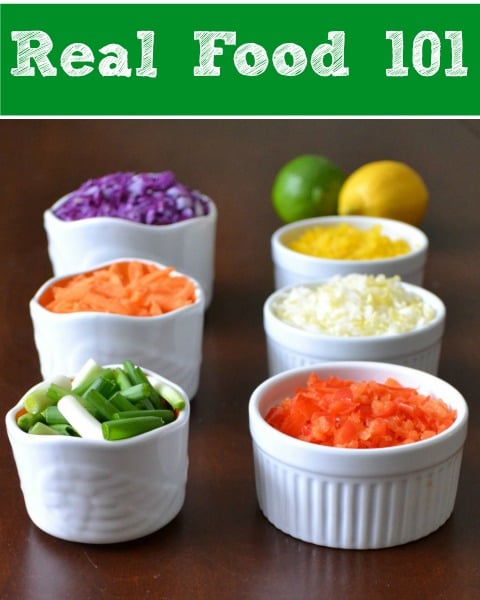 Eating a whole food diet can be tricky in a society where processed food has become the norm. The tide is starting to swing back to traditional homemade food, though, as people find that they feel much healthier when they eat real food. Different people use different guidelines when they are trying to follow a real food diet, but here are some general principles I like to follow.

Eat Lots of Fruits and Vegetables

Don’t worry about which ones are better for you, just eat lots of them. It’s okay if you can’t afford to buy everything organic. The Environmental Working Group has helpful guidelines about which fruits and veggies have the most pesticide residue, and which ones have the least.

If grains are highly processed, they lose a lot of their nutritional value. For those of us with gluten intolerance, brown rice flour and almond meal are good alternatives for baking. Also, single-ingredient brown rice cakes and brown rice crisp cereal are options.

Eat Foods in their Natural State

Make Your Food from Scratch

Make as much food as you can at home. As long as you aren’t leaning heavily on white flour and sugar, homemade foods will almost always be better for you than prepared foods that you buy at the store.

When buying a food item, choose the least processed version possible with the fewest number of ingredients. For example, if you’re shopping for peanuts, you’re better off buying a package that only lists “peanuts” in the list of ingredients. Look at a package of Planters Dry Roasted Peanuts and you’ll notice they have 13 ingredients, including sugar, gelatin, corn syrup, and maltodextrin. Who needs all that on a peanut?

Avoid buying food that has chemicals or added sugar in its list of ingredients. If you wouldn’t cook at home with an item in the ingredient list, you probably don’t want to eat it.

If you eat meat, don’t eat a lot of it. Buy the local, grass-fed version. It’s expensive, but if you’re not eating a lot of meat it shouldn’t overwhelm your grocery budget.

When describing their food choices, many people lean on the cliché, “Everything in moderation.” I like the principle behind this expression, as it directs people away from extremes. However, what I don’t like about it is that people use this expression as an excuse to eat processed food every day, just not every meal every day. Someone could use this expression to justify eating at McDonald’s three times a week. They’re not going every day, so that’s moderation, right? I don’t believe that everything should be eaten in moderation. There are many things that should only be eaten on occasion (i.e. less than once a week).

If you have other principles that help you stay focused on a real food diet, please share them in the comments! And if you’re not sure where to start, here are sample real food meal plans to give you some ideas.