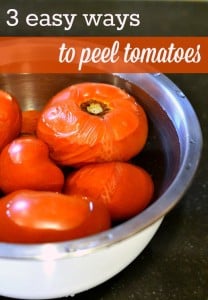 How to peel tomatoes: these 3 easy methods will help you to get those pesky skins off your tomatoes in no time!

I love seeing tomatoes filling the markets this time of year. It’s a great time to stock up and make your favorite sauces, salsas, and soups with local, farm fresh tomatoes.

The one challenge to cooking with tomatoes is getting those pesky skins off them. The last thing you want in your homemade pasta sauce is a piece of tough skin in every bite.

How to Peel Tomatoes

Here are three ways to get those skins off your tomatoes in preparation for cooking. No matter which method you use, it helps to wear food prep gloves if you have sensitive hands like I do.

Fill a large pot with water and bring it to a boil. Some people like to score the tomatoes before blanching them by cutting a shallow “X” on the bottom for easier peeling. I personally don’t bother with this step, but you may want to try it that way. Place the tomatoes in the boiling water for about a minute, or until the skins begin to split or loosen from the tomatoes.

If you don’t need to peel your tomatoes for an imminent recipe, you can put the raw, washed tomatoes in an airtight container in the freezer. When you’re ready to defrost them, put the container in the refrigerator overnight. Once they’re defrosted, you’ll be able to easily peel the skins right off. You can hurry things along by rinsing the tomatoes under running water during this process. This is the easiest method for peeling tomatoes, and it’s perfect for when you don’t have a plan to use the tomatoes just yet.

Another simple way to remove the skins from tomatoes is to roast them in the oven. Slice the tomatoes in half, cut out the stem scars, and place the tomatoes cut side down on a baking sheet. Roast them under the broiler for 5 to 10 minutes, keeping a close eye on them. If your broiler has an especially high temperature or a rack that goes close to the flame, they’ll be done even sooner. (I personally peek in the oven every 60 seconds whenever I’m using the broiler after a flaming homemade tortilla chip incident. . .)

Once the skins begin to pucker or turn slightly brown and pull away from the tomatoes, remove the tray from the oven. Do this carefully, because the tomatoes like to slide around on the tray. Let them cool a bit, then slip off the skins. These tomatoes will have a delicious, roasted flavor, perfect for pasta sauce or salsa.

Here are some of my favorite recipes featuring tomatoes:

What’s your favorite method for peeling tomatoes? Please let us know in the comments.