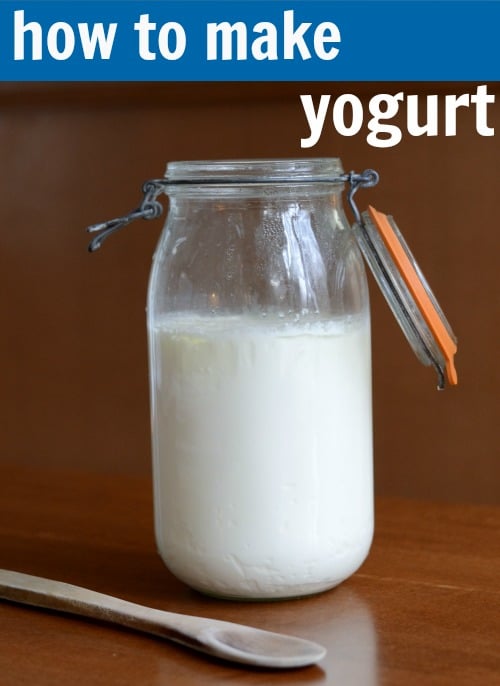 Making homemade yogurt is a great way to save money on groceries. Once you get used to the process, you’ll see that it takes almost no work to make a beautiful batch of Greek yogurt. It took me a few tries to get it right, but I’m so glad I stuck with it.

Like everyone who cooks on a regular basis, I have my share of failures in the kitchen. It’s very frustrating when a recipe that seems perfectly easy turns into a disaster. Fortunately, it only happens to me once in a while  One time, I made a beautiful batch of cole slaw. It had a rainbow of colors and the perfect dressing. In my haste to mix it up and get it on my plate, I put the whole batch in a large covered storage container and shook it up. The cover wasn’t on all the way, and on the second or third shake, the top came off and the gorgeous rainbow of colors went flying all over my kitchen. The clean-up was a nightmare with the oil-based dressing.

This recipe brings up my latest story of kitchen failure. Stay with me, though – it has a happy ending. After reading the book, Make the Bread, Buy the Butter: What You Should (and Shouldn’t!) Cook from Scratch to Save Time and Money, I was fascinated by the prospect of making my own homemade yogurt. I read several recipes, and they all seemed so easy. Mix a little yogurt with some milk, let it sit for a while, and voila! Fresh, affordable, delicious, homemade yogurt can be yours. Even better, you can strain out some of the whey to turn it into Greek yogurt. And, as if that weren’t enough, you can let it sit a little longer in the strainer, and you’ve got yourself some homemade yogurt cheese.

I tried two different recipes, and both failed. Each approach resulted in milk that tasted like yogurt, but it didn’t thicken up at all. I read in several recipes that homemade yogurt will be runnier than the store-bought version, but this wasn’t just runny; it was still milky. Both attempts required very little work and a lot of waiting. I left the yogurt to ferment overnight, and I was disappointed on two separate mornings to find a batch of yogurt-tasting milk instead of plain yogurt.

After the second failed attempt, I decided to wait a couple weeks and try one more time. If that failed too, I would let it go. Fortunately, the third time was a charm! The recipe from the Cheapskate Cook seemed to address the main problem of keeping a high enough temperature during fermentation. Here’s my photo tutorial about how to make homemade yogurt, followed by more detailed text instructions.

I spent $.96 on the ingredients for this batch of homemade yogurt. I let a lot of the whey drain out to yield a thick, Greek-style yogurt, so the final product was only about two cups of yogurt. If I had left it thinner, it would have been closer to a quart of yogurt. A two-cup container of Chobani plain Greek yogurt has a shelf price of $3.49. Store-bought Greek yogurt would cost almost four times as much as my homemade yogurt.  This recipe is definitely worthwhile for that kind of savings.

Share Your Kitchen Failures
Do you have a kitchen disaster to share? Tell us in the comment section. I think it would make us all feel better to know that we’re not the only ones setting off the smoke detector.