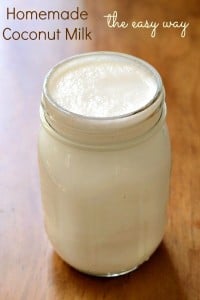 Learning how to make coconut milk is a great way to save money and control the ingredients in your non-dairy milk. You can save over $200 a year! (gluten-free, vegan)

I’ve wanted a high-powered blender for years. The reasons were many, but at the top of the list was homemade coconut milk.

I’ve been dealing with a dairy sensitivity for several years, and all the non-dairy milks I’ve found at the store have long lists of ingredients that I don’t want to be drinking.

Once I finally got a good blender and learned how to make coconut milk the easy way, my dairy-free life became much easier. I can now enjoy non-dairy milk without all the additives, and the savings are amazing.

With my high-powered blender, I can make smooth, flavorful coconut milk in just a few minutes using dried shredded or flaked coconut. It takes a little longer using fresh coconut, but the results are so creamy and fabulous that I recommend trying the whole coconut version once in a while.

Prices are always changing, but this will give you a sense of the cost of homemade  versus store-bought. I’m currently using this Bob’s Red Mill shredded unsweetened coconut, which typically costs $.28 per ounce. I use ¾ cup of this coconut in a batch of homemade milk, or about 2 ounces. So the total price is $.56 for 4 cups of homemade coconut milk using shredded coconut. When using a whole fresh coconut, the cost is $.25 per cup (with a 2 lb. coconut costing $1.50).

By comparison, the canned version typically costs $2.00 or more per can, or about $1.14 per cup. And you get something extra with the canned version: preservatives and thickeners trying to replicate the real thing.

Adapted from this recipe from Whole New Mom