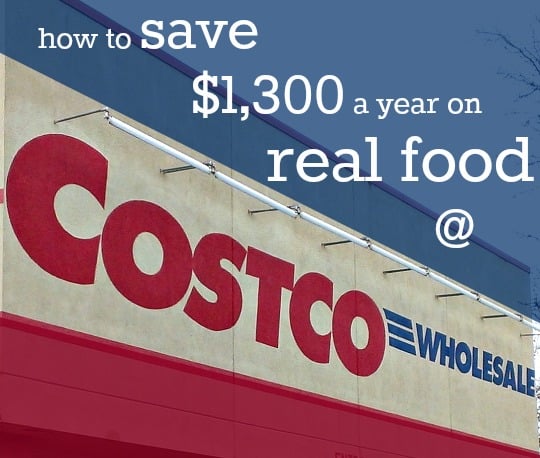 Warehouse stores can save you a lot of money. But in many cases, these big box stores focus their inventory on highly processed food. A three-pound box of Oreos might sound like a good deal at $9, but it’s not the best type of food to stock in your pantry. If you’re looking for a warehouse store that has a good inventory of organic, real food groceries, Costco is a great place for you to shop.

I recently joined Costco when they offered a Living Social deal with a discounted membership. I wasn’t sure if I wanted to join at first, so I asked my Facebook fans if there was enough real food at Costco to make it worth the trip. The response was overwhelming. People from all over the country chimed in to let me know about the many organic and minimally processed items they buy at Costco. At everyone’s urging, I took the plunge and joined Costco.

Based on the feedback from my readers, I compiled an extensive list of real food groceries that people are buying at Costco around the country. Inventories do vary, so you probably won’t find a Costco that carries all of these items. I analyzed the prices of over 50 real food items at my Costco by comparing them to the prices of similar items at other grocery stores here in Massachusetts. Almost all the items on this list are less expensive at Costco, and in many cases they cost dramatically less.

Here’s the bottom line: A family of four shopping for real food at Costco instead of a reasonably priced competitor grocery store can save $1,311.24 a year. Does that sound too good to be true? I did the math to prove it.

I analyzed the prices of 53 real food items, and 48 of them were less expensive at Costco than at Trader Joe’s, Stop and Shop, or Amazon. First, I want to highlight a handful of the best real food deals I’ve found at Costco. By buying just these 12 items at Costco instead of at a competing grocery store, my family of four can save more than $600 per year. Following this section, you’ll find the link to the complete Costco Real Food Savings Chart. This valuable resource lists 48 items you’ll want to look for at Costco to save over $1,300 a year.

Organic Eggs
Organic eggs are the best kind of eggs to buy if you don’t have access to backyard chickens or eggs from a local farm. Organic eggs come from chickens that have free access to the outdoors and to organic, non-GMO feed. At Costco, organic eggs cost $3.50 a dozen, compared to $4.29 at Stop and Shop. My family goes through about 18 eggs per week, so we’ll save $61.62 per year buying organic eggs at Costco.

Milk
The price of milk is on the rise, and Costco has the most affordable price around on hormone-free conventional milk at $2.49 per gallon. It costs $3.79 a gallon at Trader Joe’s, for a difference of $1.30 per gallon. We go through about six gallons of milk each month, so we’ll save $93.60 per year by buying it at Costco. (Note: Unfortunately, organic milk costs $3.99 per half gallon at my Costco, which is even more than the $3.79 shelf price at Stop and Shop.)

Chia Seeds
These healthy seeds are becoming more and more popular. The cost difference per pound between Costco and Trader Joe’s is over $8.00. If you use a half pound of chia seeds per month, you’ll save $48.36 over the year by buying them at Costco.

Organic Coconut Oil
I bake with coconut oil a lot, and I was paying $11.98 a month for two 16-ounce containers at Trader Joe’s. This same quantity of coconut oil costs $9.60 at Costco. Over the course of a year, I’ll save $26.88 buying coconut oil at Costco.

Organic Ground Beef
Organic ground beef is another high-quality meat option available at Costco. A family eating two pounds of Costco’s organic ground beef each month will save $66 over the course of the year.

Oats
I make lots of homemade granola, so we go through plenty of oats. A 42-ounce container of Quaker Oats costs $2.52 more at Stop and Shop than at Costco. Others have reported finding organic oats at Costco, but my store doesn’t carry them. A family that goes through 42 ounces of oats each month can save $30.24 by getting the oats at Costco.

Organic Canned Tomatoes
Canned tomatoes are great to have on hand for soups and sauces, and Costco sells them in BPA-free cans. These are significantly less expensive at Costco than at Stop and Shop, with a price difference of $2.80 for 28 ounces. A family that uses two 28-ounce cans of diced tomatoes each month will save $67.20 a year by buying the tomatoes at Costco.

Organic Canned Tomato Sauce
We go through a lot of tomato sauce in my house with all the pizza sauce, barbecue sauce, and chili we eat. This sauce does have a little added sugar in it, but we always add a bit of honey or maple syrup to our tomato sauce to cut the acidity of the tomatoes. A family that goes through one 15-ounce can of tomato sauce each week will save $50.40 by getting it at Costco.

By purchasing just these 12 items at Costco throughout the year, a family of four can save over $600.

In addition to these 12 money-savers at Costco, I’ve identified nearly 40 other items that will save you smaller amounts of money with each purchase. These smaller savings do add up, though. If you consistently buy the items on my detailed Costco shopping list throughout the year, you can save over $1,300 for a family of four.

Here’s my detailed Costco Real Food Savings Chart. You can enjoy this resource free of charge. If you’re interested in getting additional resources that will help to save you money on real food, please sign up for my weekly email updates in the box at the bottom of this post.

3/4/14 Update: I’ve added several more items to the list, and the savings total is now over $1,400 a year. It keeps getting better as I find more real food items on the shelves at Costco.

Other Notes about Costco

Sales and Coupons
The prices in my Costco shopping list are the regular shelf prices for these items. The deals get even sweeter when Costco offers sale prices and store coupons for real food and organic items. For example, last month I was able to buy 54 ounces of coconut oil for $12.99 instead of the regular price of $15.99. I bought four big containers, and in retrospect I wish I had bought even more. The coupon booklet also alerted me to Costco’s organic, whole grain spelt pretzels. This is the first time I’ve seen a package of pretzels with a real food ingredient list including just four ingredients: spelt flour, sunflower oil, sea salt, and baking soda. I stocked up on these as well, and they’re really good.

Stick to the Script
Despite all these great deals, there are a lot of highly processed items at Costco, too. I recommend shopping with a list and sticking to it. Impulse purchases at Costco place a bigger dent in your wallet than impulse purchases at a store that doesn’t sell food in bulk quantities. Before buying anything in bulk, evaluate whether you’ll use it up before it goes bad. For example, spices don’t keep forever, so you may be better off buying them in smaller quantities at Trader Joe’s. Also, the 10-pound bag of organic carrots is a great deal for $.79 per pound, but do you have room to store all those carrots? And is it realistic to think you’ll eat them all or take the time to freeze them before they spoil? If it is realistic, then go for it. But be sure to think before you put a big package of anything into your cart.

Costco is a great place to save money on high-quality, organic, real food groceries. The $55 membership fee pays for itself many times over as long as you shop with discipline. Look for the green shelf tags identifying organic items, and don’t even bother walking down the cookie aisle. Keep your eyes out for other real food items not found on my list, because I didn’t cover everything. There are several other types of nuts, frozen produce, and fresh produce that you may want to add to your shopping list.

Here are some of my popular money-saving posts:

If you’re a Costco shopper, I’d love to hear in the comments about what other real food items you purchase at Costco. I’ll look for them the next time I go shopping!