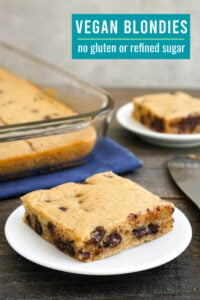 These vegan blondies are such an easy, delicious dessert! Nobody will believe that they’re actually healthy.

Blondies are one of my favorite quick desserts to make. When I don’t have time to go in and out of the oven with a batch of cookies, I like to make a big batch of pan cookies.

These vegan blondies are deliciously sweet. The maple syrup gives them a rich, brown sugar type of flavor. The texture is dense and moist. It’s hard to believe there are no eggs or butter in them.

I like to eat these blondies within two days of baking. Any extras can be frozen for another time. You’ll be lucky if you still have leftovers after two days!

I use a flax egg in addition to applesauce to get the right texture in these vegan blondies. To make a flax egg, stir together the flaxseed meal and water in a small bowl. Set it aside for a few minutes while you prepare the other ingredients, and it will thicken to a texture similar to an egg.

Full fat coconut milk is a nice rich addition to this recipe, but you can also use my thinner homemade coconut milk, almond milk, or oat milk.

Bake these vegan blondies until they’re set in the center, about 35 minutes. They’re nice and moist at this point. If you bake them too long, they’ll end up a bit drier.

For a non-vegan batch of blondies, try my gluten-free blondie recipe. They use eggs for texture, and they’re just as delicious! 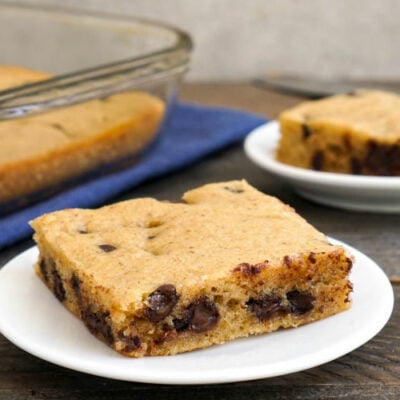 This recipe costs a total of $8.67 to make, or $.72 per serving. Try these delicious gluten free, vegan blondies for an easy dessert that everyone will love. They’re so much easier to make than a traditional batch of cookies.