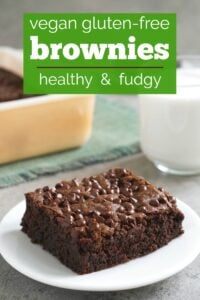 These vegan gluten free brownies are so delicious! The key to getting fudgy eggless brownies is to use rich ingredients like coconut milk and pure maple syrup.

Brownies are the perfect comfort food. One bite of chocolatey goodness can make my problems seem a little smaller.

I make several different versions, including pumpkin brownies and chocolate peanut butter brownies. Each one of these dairy free brownie recipes has its own unique flavor and texture.

These vegan gluten free brownies avoid many of the top allergens, but they don’t taste like it. The rich, fudgy texture is just what you’d expect from a classic brownie. This recipe is a great one to make if you’re serving a mixed group of people with various food preferences, allergies, or intolerances.

Eggs help to give traditional brownies their rich texture. I use a flaxseed egg, along with coconut oil, coconut milk, melted vegan chocolate chips, and pure maple syrup to replicate that fudgy texture in these eggless brownies.

Sprinkle mini vegan chocolate chips on top of these healthy brownies before baking them. This gives them an extra boost of chocolate flavor, along with a beautiful presentation.

Let the brownies cool in the pan before cutting them. It’s tempting to cut them while they’re still hot, but they settle and become dense and fudgy after they’ve cooled. They’re still great the next day, but it’s a good idea to freeze the extras if you won’t eat them within 2 days.

Try my vegan blondies for another decadent vegan dessert. 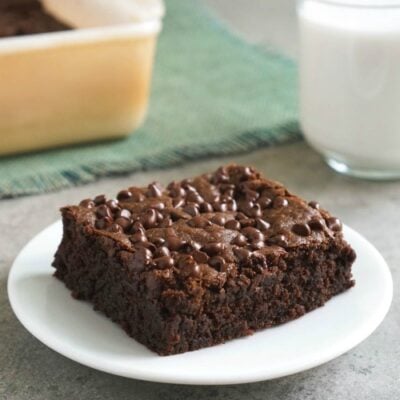 This recipe costs a total of $6.55 to make, or $.73 per serving. Try these easy vegan gluten free brownies for a delicious, healthy chocolate treat.

The FTC has regulations about what bloggers disclose when recommending or advertising products. This information is outlined in my disclosure policy.
Previous Post: « Gluten Free Gingerbread Pancakes
Next Post: Sweet Potato Black Bean Enchiladas »