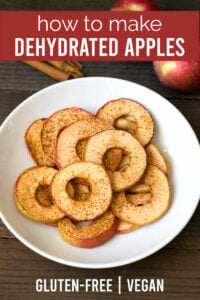 Dehydrating apples is so easy! You can use an oven or a dehydrator to make these delicious, healthy dehydrated apple chips.

My family has a tradition of going apple picking every fall. We love the cider donuts and fresh applesauce that result from those excursions. But the best part is coming home and dehydrating apples.

Dehydrated apple chips are a great substitute for candy. They’re simple to make in the oven or in a dehydrator. Sprinkle them with cinnamon for an irresistible gluten-free, vegan snack. These dried apples are a great addition to apple granola, too.

Apple chips are incredibly simple to make, especially if you have an apple corer that just removes the core and leaves the rest of the apple intact. These can be baked with the skins still on them, and a sprinkle of cinnamon gives them the best flavor.

It’s important to slice the apples into uniformly thin rings. I like a thickness of about ¼ inch, but you could go thicker or thinner if desired. Just be sure they’re all about the same thickness, or cook times will vary from one slice to another.

Grease the baking sheet with olive oil to keep the apple rings from sticking to it. If you’re using a dehydrator, there’s no need for the oil.

These dried apples can be stored at room temperature in an airtight container for at least 2 weeks. If they’re crispy and most of the water has been removed, they’ll last even longer.

How Long Does It Take to Dehydrate Apples?

In the oven, it takes about 2 hours at 225 degrees to dehydrate apples to a chewy texture. For crispy apple chips, leave them in the oven for about 2 ½ hours.

If you’re using a dehydrator, set the temperature to 135 degrees. Place the sliced cinnamon apple rings on the dehydrator trays. For chewy dried apples, it will take about 6 hours. They’ll be crispy in about 8 hours.

This recipe costs a total of $1.97 to make using apples priced at $1.50 per pound. This comes out to $.18 per serving (4 dried apple chips). Try dehydrating apples the next time you go apple picking!

For a similar treat, make my dehydrated banana chips when you have an abundance of ripe bananas on the counter.