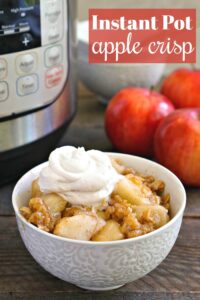 Apple crisp is an essential treat in my house during fall. We love to go apple picking, and one of our favorite things to make when we get back from the orchard is this Instant Pot apple crisp.

The pressure cooker version of this dish is a little different than a traditional oven-baked apple crisp. The topping comes out soft rather than crispy, but the flavor is the same. The apple cinnamon goodness shines through, and this Instant Pot apple crisp comes together more quickly than the oven version.

This recipe has a cook time of one minute. It takes between 10 and 15 minutes for the pot to come to pressure. Add this to the 15 minute prep time, and you can have this Instant Pot apple dessert on the table in 30 minutes.

The minimum liquid for the Instant Pot is usually one cup, but I only use 3/4 cup of water in this recipe. That’s because the apples release their juices as the pot comes to pressure, which generates more liquid and allows the pot to come to pressure. Any more water would turn this into applesauce.

I’ve made this recipe several times, experimenting with using a half cup of water as well as 1 cup of water. There was one occasion when the pot didn’t come to pressure, but it still cooked the apple crisp perfectly while it was trying to come to pressure.

For the best texture, chop the apples into large cubes or slices so they don’t turn to mush. If you want to make Instant Pot apple pie filling, follow this recipe and simply skip the crisp topping.

Even though the topping on this Instant Pot apple crisp is mostly soft, it does have a bit of crunchiness from the oats and walnuts. If you want to dry out the topping after cooking this in a pressure cooker, you can transfer it to an oven-safe dish and put it under the broiler for a few minutes.

If you don’t prefer the cornmeal texture in your crisp topping, you can substitute unsweetened shredded coconut. I’ve made this Instant Pot apple crisp both ways, and they’re equally delicious.

There are lots of different apple recipes you can make in a pressure cooker. Try some of these when you have lots of apples in the fall: 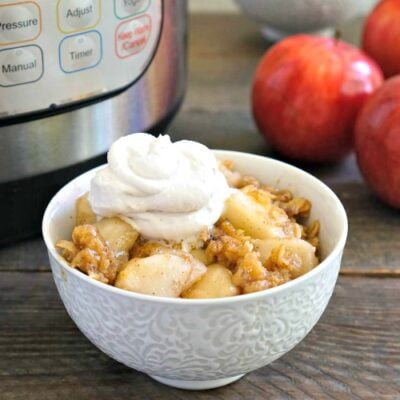 If you want the topping to be crispier, you can transfer the mixture to an oven-safe dish and put it under the broiler for about 4 minutes, keeping a close watch on it. I’ve made this recipe several times, using between 1/2 cup water and 1 cup water. Occasionally the pot doesn’t fully come to pressure, but the apple crisp still cooks while the pot tries to come to pressure.

This recipe costs $7.97 to make, or $1 per serving. Enjoy this delicious apple crisp for an easy, healthy dessert.