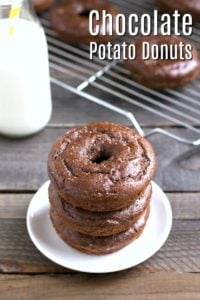 These chocolate potato donuts are a delicious breakfast or snack that you can feel good about eating. They’re healthy compared to most donuts. Gluten-free, dairy-free recipe.

Several months ago, my family experienced the phenomenon that is the Holy Donut in Portland, Maine.

We’d heard about these special donuts from several people in the Boston area who always make sure to stop at the Holy Donut when they’re in Maine. The secret ingredient in these delicious donuts is mashed potatoes.

I love the fact that they use high quality ingredients in these donuts, and the guilt factor is minimized because they have potatoes in them. Vegetables and donuts don’t usually mix, so I was intrigued.

We weren’t disappointed by the rich, dense donuts we sampled at the Holy Donut. We each had a favorite, and mine was the dark chocolate sea salt donut. I’m excited to share my own version of these little delicacies with this recipe.

Fortunately, I was able to find one of the Holy Donut’s actual recipes in this Press Herald article. I adapted it to make a gluten-free, dairy-free version of chocolate potato donuts.

The store’s donuts are fried in canola oil, but I baked mine using a donut pan. They came out better than I had even hoped, and my family devoured them in record time. I’m excited that I now have access to these delicious donuts without having to travel to Maine for them.

I like to use a potato ricer to mash the potatoes very smoothly. You won’t notice they’re in there when you’re eating these donuts.

This recipe makes 18 donuts, so you may want to cut it in half if you want a smaller batch. You can always freeze the extras. No matter how you make them, I don’t think you’ll be able to look at regular donuts the same way again after you try these. 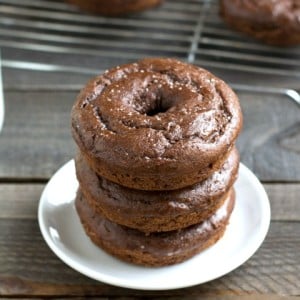 Adapted from this Press Herald article

This recipe costs a total of $7.90 to make, or $.44 per donut. The gluten-free potato donuts at the Holy Donut cost $3 each, so the homemade version is much more affordable. You can eat almost seven of these homemade donuts for the price of one donut at the shop (but for the record, I don’t recommend eating seven donuts in one sitting). Try these delicious chocolate potato donuts for a fun, healthier snack on the go.

Try my gluten-free pumpkin donuts for another delicious homemade snack.

The FTC has regulations about what bloggers disclose when recommending or advertising products. This information is outlined in my disclosure policy.
Previous Post: « Sweet Potato Hash Recipe
Next Post: Inn by the Sea Maine Review »