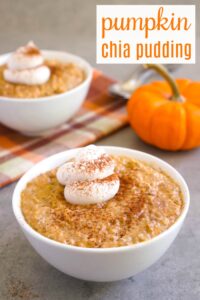 This pumpkin chia pudding is such a rich, delicious vegan treat for fall! It’s healthy enough for breakfast or snack, and tasty enough for dessert.

Chia pudding is one of my favorite healthy snacks. It’s so easy to make, and it’s very filling and satisfying. The flavor options are limitless, from coconut and chocolate banana to strawberry mango and raspberry chocolate.

During the fall, I make this pumpkin chia pudding recipe on repeat. It tastes like pumpkin pie, but it’s much more nutritious.

This pudding is very thick and creamy, more than other chia puddings tend to be. The extra thickness is due to the pumpkin puree and full-fat coconut milk. The chia seeds thicken it even more, making this recipe a great substitute for a traditional dairy-based pudding.

Because it’s so rich, a little bit of this pumpkin chia pudding goes a long way. A serving of just a half cup will fill you up until your next meal.

This pudding starts to thicken right away because of the full-fat coconut milk and pumpkin puree. I like to refrigerate it for an hour so it thickens even more, but you could also eat it shortly after mixing.

For the best texture, whisk in the chia seeds slowly so they don’t clump together.

This pumpkin chia pudding is fairly sweet, similar to pumpkin pie. For a less sweet version, you could cut the maple syrup to 3 tablespoons instead of a quarter cup. My family likes this recipe as written with a quarter cup of sweetener.

If you want to top it with coconut whipped cream, see my fruit pizza post for instructions about how to make the whipped cream. Be sure to chill the coconut cream overnight to get the right texture. 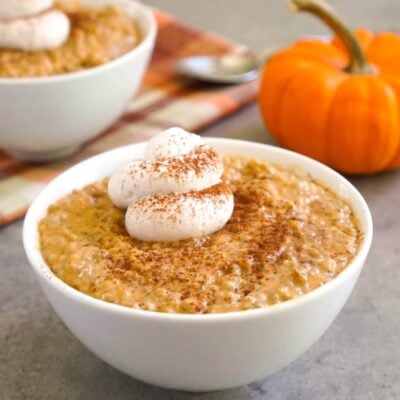 This recipe costs $3.63 to make, or $.61 per serving. Try this delicious vegan pumpkin chia pudding for a healthy snack or breakfast.