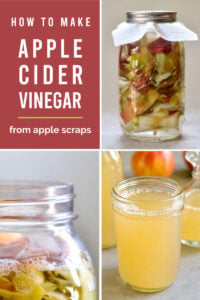 You won’t believe how easy it is to make homemade apple cider vinegar from apple scraps. It’s so good for you, and it costs less than a penny per tablespoon.

Apple cider vinegar is a staple in my kitchen. It’s perfect for a quick salad dressing, but it has many other uses as well. I add it to my cranberry walnut chicken salad for extra flavor, and it’s a central ingredient in my homemade barbecue sauce. It gives pulled pork the perfect amount of zing.

You can buy apple cider vinegar, but it’s also easy to make from scratch. It costs next to nothing since apple scraps are typically discarded when making apple crisp, applesauce, or other apple treats. If you can make a spot for the jar on your counter, you can make this recipe.

How to Make Apple Cider Vinegar

To make your own apple cider vinegar, submerge apple scraps in water and mix in a little sugar. Use a jar that becomes more narrow at the top so that the apple scraps stay submerged. Cover the jar with butter muslin, a paper towel, or a coffee filter to keep fruit flies away. The mixture will sit at room temperature for a couple weeks to get the process started.

After a few weeks, the scraps get strained out and the vinegar sits at room temperature for at least another month. Eventually, it will begin to taste like the ACV you can buy at the store.

Once it’s finished fermenting, store the vinegar in an airtight container at room temperature. It should keep indefinitely, but the quality may begin to deteriorate after 6 months to a year.

Can You Use Apple Cider Vinegar to Clean?

Equal parts ACV and water can be used for a stronger cleaner on floors, sinks, and other household surfaces. It can even be used to clean up pet messes in the home.

If your batch of DIY apple cider vinegar gets moldy or doesn’t taste how you want it, shift it into a frugal cleaning supply.

For centuries, people have been consuming apple cider vinegar due to several perceived health benefits. Many people like to mix it with raw honey and water to make it more palatable, and to take advantage of the additional benefits of raw honey.

Some studies suggest that these ingredients may help with inflammation, allergies, and weight loss. While these claims haven’t been definitely proven, anecdotal evidence suggests that apple cider vinegar may be beneficial in a wide variety of ways.

Some people swear by apple cider vinegar as a digestive aid, a skin care product, and a hair conditioner. Even if you want to stick to using it just for salad dressing or cleaning, making your own ACV is a simple way to be frugal and avoid food waste. 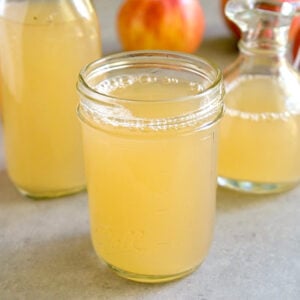 I don’t assign a price to water in my recipes, and since apple scraps are usually discarded, the only expense in this recipe is the sugar. The full batch costs just $.06 to make, or $.02 per cup. That’s less than a penny per tablespoon. Try this frugal recipe the next time you make a treat with apples.

Check out my homemade coconut milk for another great affordable DIY recipe!