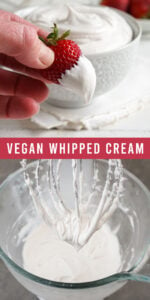 So many desserts are missing something without a dollop of whipped cream. Crisps, cobblers, pudding, and brownie sundaes are all better off with whipped cream in the picture.

For a non-dairy alternative to traditional whipped topping, this vegan whipped cream made with full fat coconut milk is the perfect thing.

I love the flavor of whipped coconut cream, and I’m always surprised by how similar it tastes to regular whipped cream. It does have a bit of a coconut flavor, but the texture is just like the real thing.

It’s very important that you do two things before making this recipe: chill the cans of coconut cream in the refrigerator overnight, and freeze the mixing bowl and beater for at least 15 minutes before beating.

If you skip these important steps, the coconut cream won’t whip. It’ll just separate into a chunky mess, as you can see in the image below. The bowl on the left has been whipped at room temperature, and the bowl on the right shows vegan whipped cream that’s been properly chilled before whipping.

Between half and two-thirds of the can should be coconut cream. You’ll need two cans for the best results using a Kitchenaid mixer or other large bowl. If you want to cut this recipe in half, use a smaller bowl with a hand mixer.

Try my gluten-free fruit pizza or vegan chocolate mousse if you’re looking for a fun way to use this delicious vegan whipped cream. You can also simply add it to a bowl of fruit for an easy dessert. 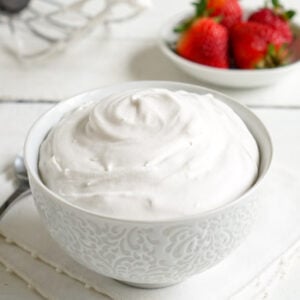 This recipe costs a total of $3.50 to make, or $.22 per serving (2 tablespoons). I get my cans of coconut milk for $1.50 each at Costco, but you should be able to find full fat coconut milk at just about any grocery store. Try this easy vegan whipped cream for a delicious topping on your favorite dessert.